Why body language matters during an interview

Body language speaks louder than words, and will be a determining factor when making an impression on potential employers. Here’s how to ace non-verbal communication and win over your next boss.

Whether we like it or not, body language always speaks loudest.

And there are few times during your career that body language will be more crucial than during a job interview.

Preparing what we’re going to say is not enough, because how we present ourselves goes a long way to determining the impression we give to potential employers.

The famous ‘7-38-55’ theory – that a certain proportion of our communication when expressing feelings or opinions is transmitted verbally (7%), vocally (38%) and facially (55%) – has helped make us more aware of the power of body language and non-verbal cues.

In an interview, where you should be keen to convince interviewers that you are motivated, well-qualified, and a good personal fit for the position, the role body language plays can be the difference between success and failure.

In pressurised situations like interviews, consciously regulating your body language is even more important.

Though while this is true for interviews, good body language is equally relevant for successful networking, meetings, and day-to-day communication with work colleagues.

Here are seven key areas of non-verbal communication that can help you make the right impression, especially when face-to-face with your dream job.

Handshakes aren’t a problem until they go wrong.

Loose or weak handshakes are often associated with a lack of interest or enthusiasm. A tight or strong handshake can be a sign of aggression or pushiness.

The perfect handshake is a balancing of forces, both parties feeling equally acknowledged by the other.

Maintaining eye contact is important, but should not be forced.

This is important for establishing a connection with the interviewer – or interviewers – and for showing that you’re engaged and interested in what they have to say (and what they think about what you’re saying).

If there are multiple interviewers, be sure to share the eye contact around, even with those who are not leading the interview – this shows you are aware of their presence, and concerned about what they think.

Arms are an underrated factor in interviews. What you do with them will largely determine the impression your body language gives off.

‘Closed’ body language, such as folded arms, wrists between the knees, or hands clasped together in front of the chest, can all block the personal connection you should want to make with your interviewer(s).

‘Open’ body language, with your arms resting in a natural position in front of your body, invites others to communicate with you. Using your hands when talking will also help convey a sense of intimacy, familiarity, and openness that will help resolve any tension.

Interviewers will pick up on any nervousness or awkwardness from your body language, so if you are feeling the pressure try to enforce some composure through the way you are seated.

Coming across as relaxed will not convey professionalism, though. And it may not be necessary to adopt a studiously neutral pose or a rigid military posture either.

The ideal composure is somewhere between formal and informal, with an alertness to show you are engaged. Keeping your hands resting in a simple pose will help transmit a sense of calm.

Interviewers want to meet someone who is engaged, motivated, and inspired to give a good account of themselves. What they really want is that you want the job.

There are many ways to show you are listening and interested in what they have to say, such as nodding or agreeing with what they’re saying. But do it too much and it gets in the way of the interview (and suggests you are faking it).

The way you act when you’re speaking can also help to show you are motivated. A lack of enthusiasm is often obvious in a speaker. But laying enthusiasm on too thick can be jarring for the interviewer, lessening the personal connection you might be forming.

Not smiling enough can betray nervousness or a lack of confidence. Frowning is just plain wrong.

You should be conscious at all times of how you are reacting to questions or statements made by the interviewer(s), and how you might be feeling, in order to keep a consistent expression. A smile is always more engaging, and a sure sign of confidence.

A forced smile can usually be spotted a mile away, so just try to enjoy yourself, channeling your nervous energy into positive, rather than negative, emotions.

Your tone of voice, and how you are speaking generally, is contained in the verbal part of the 7-38-55 mentioned above – it’s the 38%, so it’s important.

Speaking with a confident voice, in shorter sentences punctuated with clear but brief pauses, makes a good impression while allowing your potential employer to follow what you’re saying. Avoid talking too fast as it’s difficult to keep up with and conveys nervousness and a lack of comfort.

Adopting a confident and deliberate way of speaking is important for your interviewer to take you seriously. If you are intimidated, and it comes out in your manner of speaking, you are unlikely to get the job.

Use your voice to overcome your nerves and present yourself as a serious candidate. 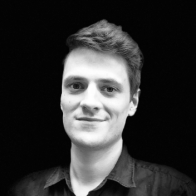 Allan Peas: The power is in the palm of your hands